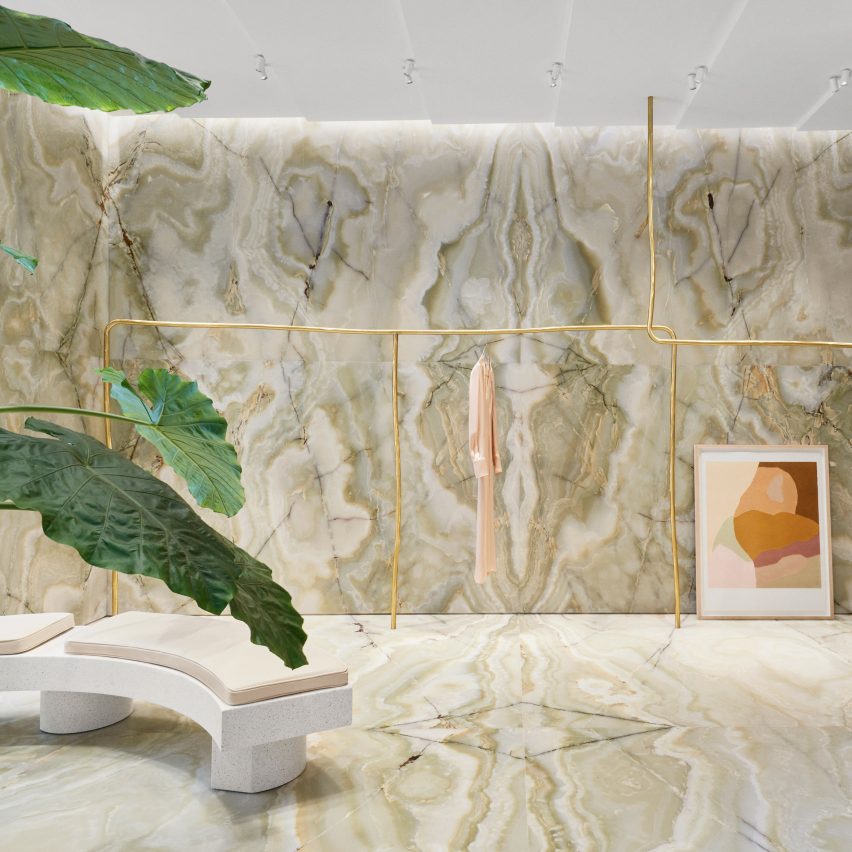 Green onyx lines the floors and walls of this fashion boutique in Rome by creative duo Giada Forte and Robert Vattilana.

The Forte Forte store is located on Via Borgognona, a street in the heart of the Campo Marzio – the 4th rione, or district, of Rome – that was once full of artists.

The boutique was designed by the brand‘s co-founder, Giada Forte, and her partner, creative director Robert Vattilana.

The duo wanted to create a store interior that would sit in contrast with the building’s traditional travertine facade.

“The focus is on contrast, because in Rome contrast is always, and has always been, harmony,” said Forte. “The boutique looks like a vibrant monolith of green onyx, a precious material with a unique design that contains a thousand-year history in the loops of its marbling.”

“Green onyx creates a total immersion in the shop: it drowns the entire space, from floors to walls.”

Sourced from Afghanistan, the onyx was treated in large symmetrical blocks and worked to obtain a matte surface. Lighting that runs around the perimeter of the store illuminates it in a “cascade” of light.

“Thanks to the particular mineral structure, [the onyx] dematerializes in contact with the light in nuanced transparency,” explained Forte.

Brass serves as an accent material to complement the onyx and is used to form hangers, curved clothing rails, mirrors and shelving.

In the portion of the store nearest to the entrance, the ceilings are finished with white overlapping panels, while further inside, the designers installed a white plaster ceiling punctuated by porthole lighting.

Portholes also adorn the brass doors of the dressing rooms, which have walls clad in buttoned sage-coloured capitonné velvet to create a “boudoir-like” interior.

The area in front of the dressing rooms is occupied by a circular bench carved from a block of agglomerate, which wraps around a cloud-shaped vase containing an alocasia plant with giant leaves.

The dressing rooms and the seating and display area are divided by a triptych wall-mounted mirror, while the ceiling features a large curved shield painted in sage green.

The back wall of the store, where the cash desk is located, is clad with panels of polished brass. Here, a brass-framed onyx door provides access to the warehouse, which is organised with sage green filing cabinets placed on rails.

The store is the brand’s eighth outpost, with others located in Madrid, London, Paris, Tokyo, Forte dei Marmi, Cannes and Milan.

The Forte Forte London store was opened in 2019 and features clay bricks, onyx and plush velvet.

Photography is by Danilo Scarpati.