AHEAD will announce the best new hotel designs in Asia in a video ceremony broadcast by Dezeen for the hospitality awards programme. Tune in from 7:00pm Singapore time.

The ceremony, which begins at 7:00pm Singapore time (12:00pm London time), will be broadcast in two parts that can both be viewed below.

The event is hosted by Sleeper Magazine‘s editor-at-large Guy Dittrich, and features exclusive video content from the AHEAD nominees, as well as from the judges and sponsors of the awards programme. 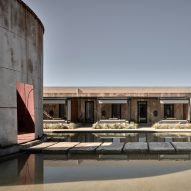 The AHEAD awards, which celebrate striking hospitality projects from across the world, are split into four different regions: MEA, Asia, the Americas and Europe.

The 2021 Asia leg of the competition reviewed projects that have opened, reopened or launched in the continent between January 2020 and February of this year.

The second part of the ceremony will announce the winners of the Resort Hotel, Restaurant, Spa & Wellness and Suite categories, and the AHEAD Asia Hotel of the Year will be revealed.

This video was produced by Dezeen for AHEAD as part of a partnership. Find out more about Dezeen partnership content here. Images courtesy of AHEAD.

FWS_work designs Residence W as a tranquil retreat in the city